Luang Prabang and Vientiane in Laos are the epicenters of tradition and culture for not just pious locals, but travelers as well. Home to UNESCO World Heritage sites, their quiet streets are littered with dozens of wats and pagodas, each a uniquely ornate and beautiful testament to a country’s religious philosophy and well worth a stop during any visit to Laos.

Here at Buffalo Tours, we love discovering not just Laos’ wats and padogas, but also what makes each one so unique. While we think that nearly every temple in Laos is nothing short of stunning, there are some that stand out among the rest. Whether its the design, the traditions or the history, each of these wats and pagodas have a little something special for visitors to Luang Prabang and Vientiane. For us, they are without a doubt some of Laos’ must-see spots, and we’re confident that they’re worth the visit. Silver Pagoda To describe Luang Prabang’s Silver Pagoda — cleverly hidden within the confines of the Royal Palace — as magnificent would be an understatement. With its interior floors gilded with over five tons of gleaming silver, the aptly-named pagoda is perhaps one of the most ornate and downright ostentatious among its architectural counterparts. Beyond the pagoda’s silver tiles, though, stands Silver Pagoda’s most incredible element — two majestic Buddha lounging atop a pedestal, one of Baccarat crystal and the other 90 kilograms of solid gold. The latter is adorned with some 2086 diamonds, and brings new meaning to the word bejeweled. That Luang Pagoda 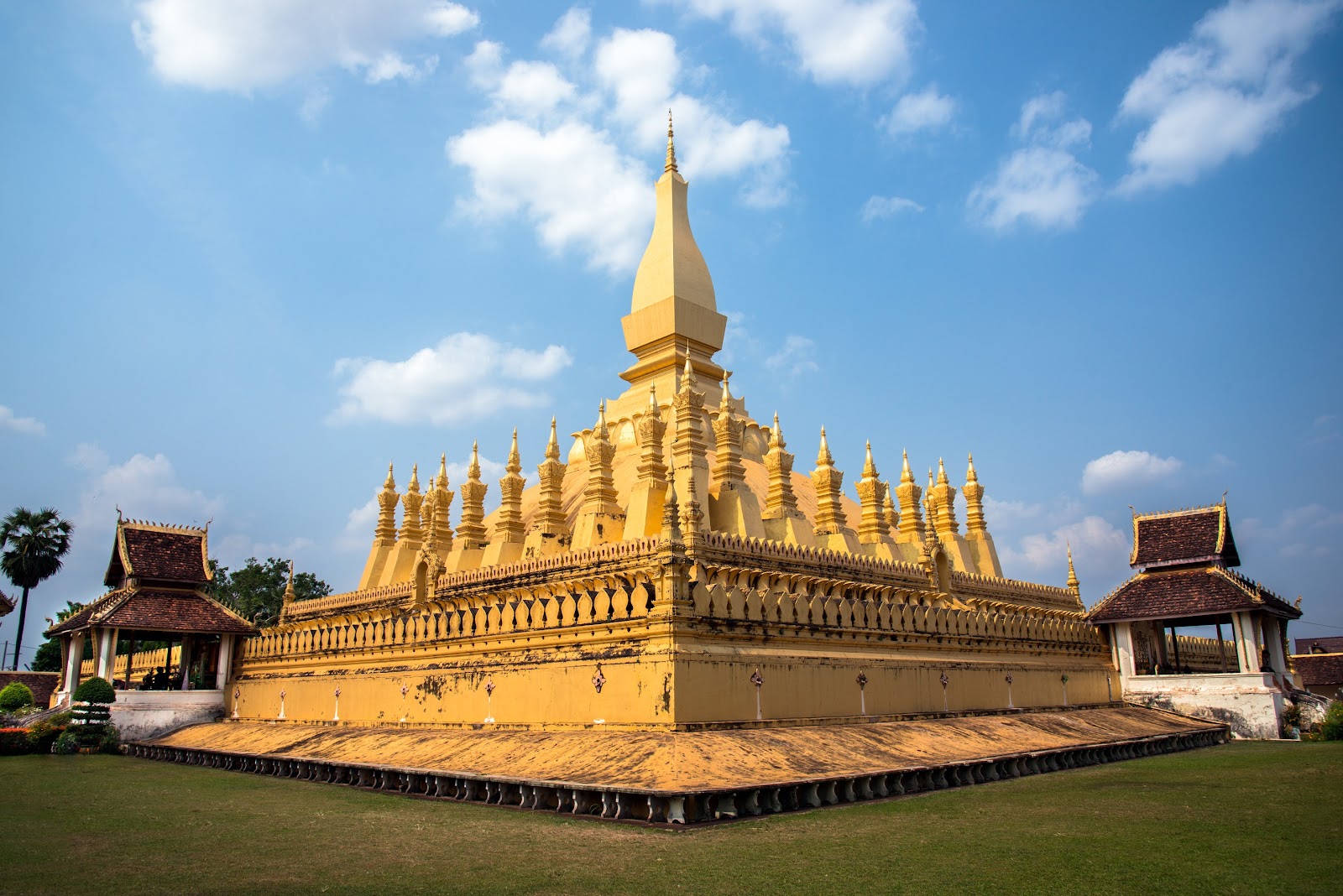 Pha That Luang in Vientiane With a magnificence similar to that of the silver pagoda, That Luang Pagoda is generally regarded as the most important national monument in the country. It’s no surprise, since the ‘Great Stupa’ as it is called is covered entirely with gold. According to the locals, That Luang Pagoda was built as far back as the 3rd century as a Hindu monument, but after centuries of tumultuous warfare and myriad foreign invasions, That Luang went through transformation after transformation from the home of a Lord Buddha relic to a Khmer temple that eventually fell into ruin. After a move to the modern capital of Vientiane and its demolition during a Thai invasion in 1828, That Luang Pagoda came back to life in the early 1900s and, finally, was completely reconstructed after WWII. Its golden facade is now almost flawless, since it’s continuously restored and protected under its UNESCO badge. Despite the universe’s best efforts, That Luang stood the test of time to become a modern icon of the country. Wat Xieng Thong (aka: Golden City or Golden Tree) 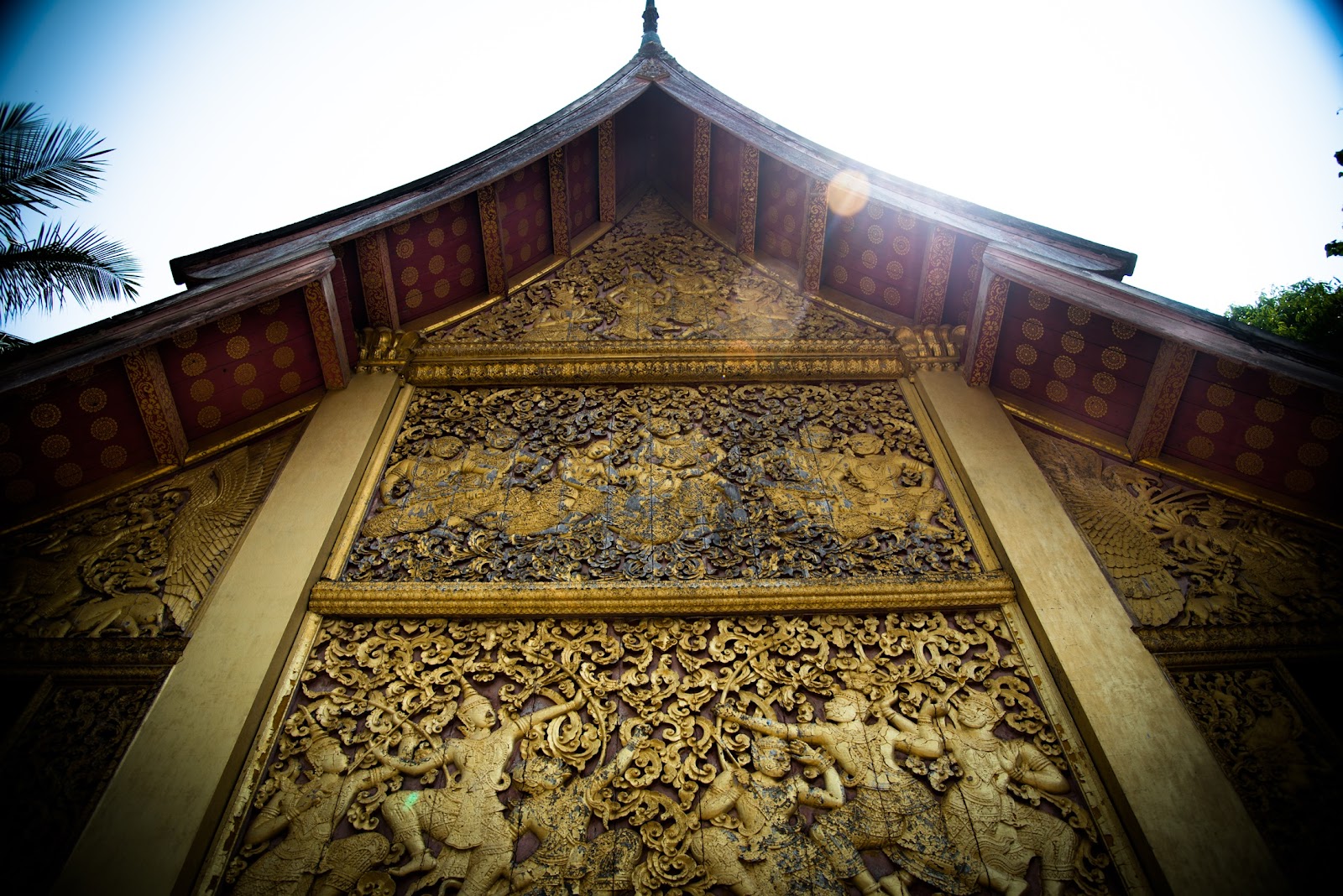 Wat Xieng Thong Although curiously lacking the ostentatious design of Silver and That Luang pagodas, Wat Xieng Thong makes up for its rather demure appearance with its religious importance. Regarded as Luang Prabang’s most historically significant wat, Xieng Thong is a perfect example of Laos’ iconic religious architecture. Its low swooping, double-tiered roof is a perfect example of Luang Prabang’s classic style, and the interior of its monastery is equally impressive. Nestled along the banks of Nam Khan River, Wat Xieng Thong was once an importance gateway to the city, and often served as the entry point for royalty and even the location of kingly coronations in days past. Not only a home to the majestic rulers of Laos, Wat Xieng Thong continues to be a hub for Buddhist festivals and celebrations, often center to honoring folk spirits and the Buddha himself. Wat Mai 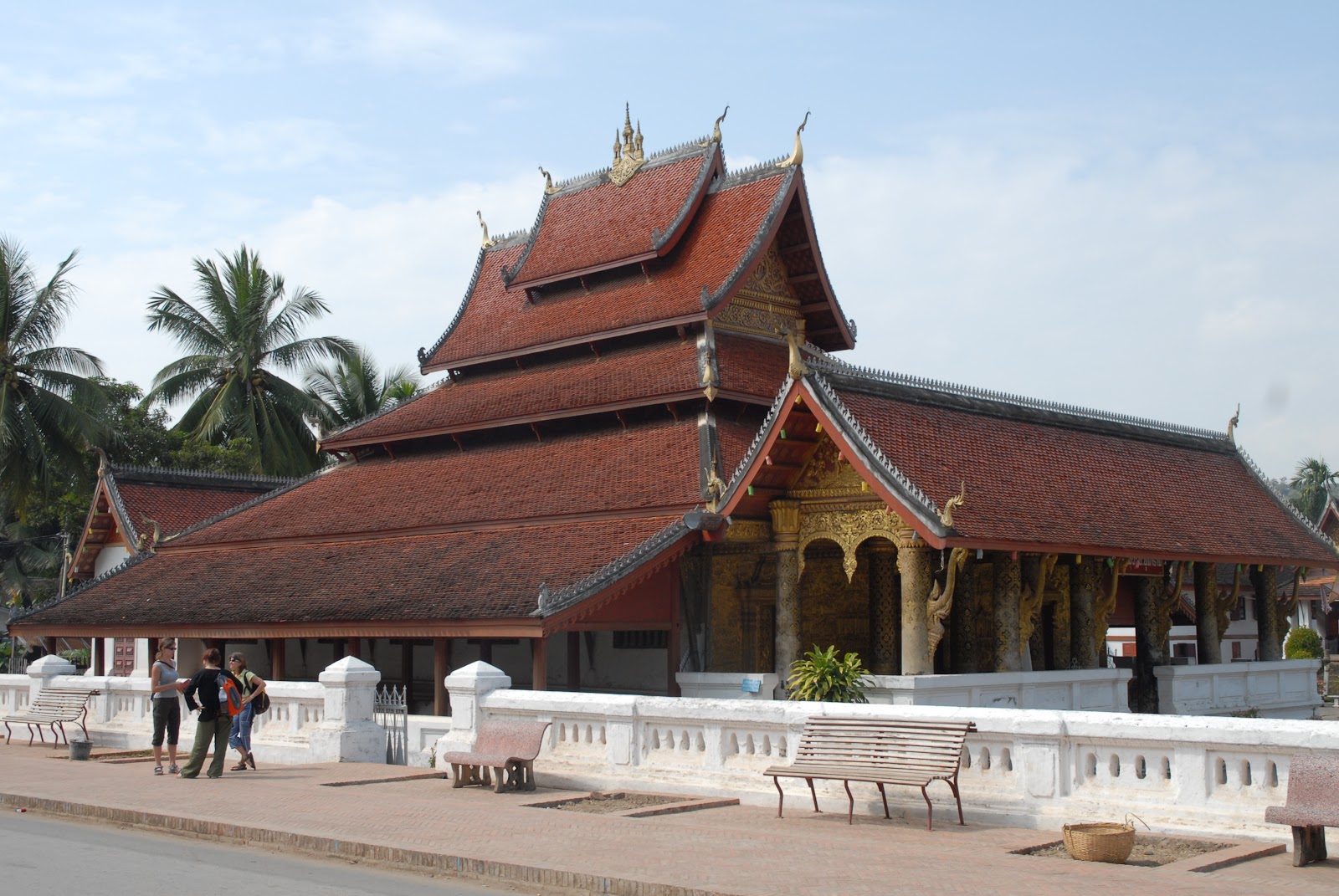 Wat Mai Boasting one of the best locations of all of Luang Prabang’s wats, Wat Mai is one of the most visited and revered wats in all of Laos. Its situation just next to the night market and the Royal Palace puts it right along the trail for visitors, but its popularity is well-earned. Often called the New Monastery, Wat Mai is of particular importance to Laotians. Having been previously destroyed by Chinese invaders many centuries ago, Wat Mai was eventually restored to become the eventual residence of the highest Buddhist dignitary in Laos, Pra Sangkharat. Even after its honored resident was past, Wat Mai is also the central location for pious pilgrims who travel to the wat for the Lao New Year. During the celebration, referred to locally as Pimay, visitors travel miles to see the Pha Bang — an ancient Buddha statue after which Luang Prabang is named — during its short three-day display. Wat Sene Souk Haram Known literally as the “Temple of 100,000 Treaures”, Wat Sene Souk Haram is famous not just for what treasures it hides, but for its construction itself. As one of the first wats to be covered in yellow and red tiles in modern Thai fashion, Sene Souk Haram was constructed of 100,000 stones from the Mekong river by King Kitsarath with particularly flamboyant glittering gold facade. Made up of a vihan, a that, many koutis and a shelter for dozens of fantastically ornate pirogues — or Laotian traditional boats — Wat Sene Souk Haram is certainly home to not only iconic architecture and design, but the very remnants of Laos’ cultural past. Wat That (aka: The Stupa Temple) 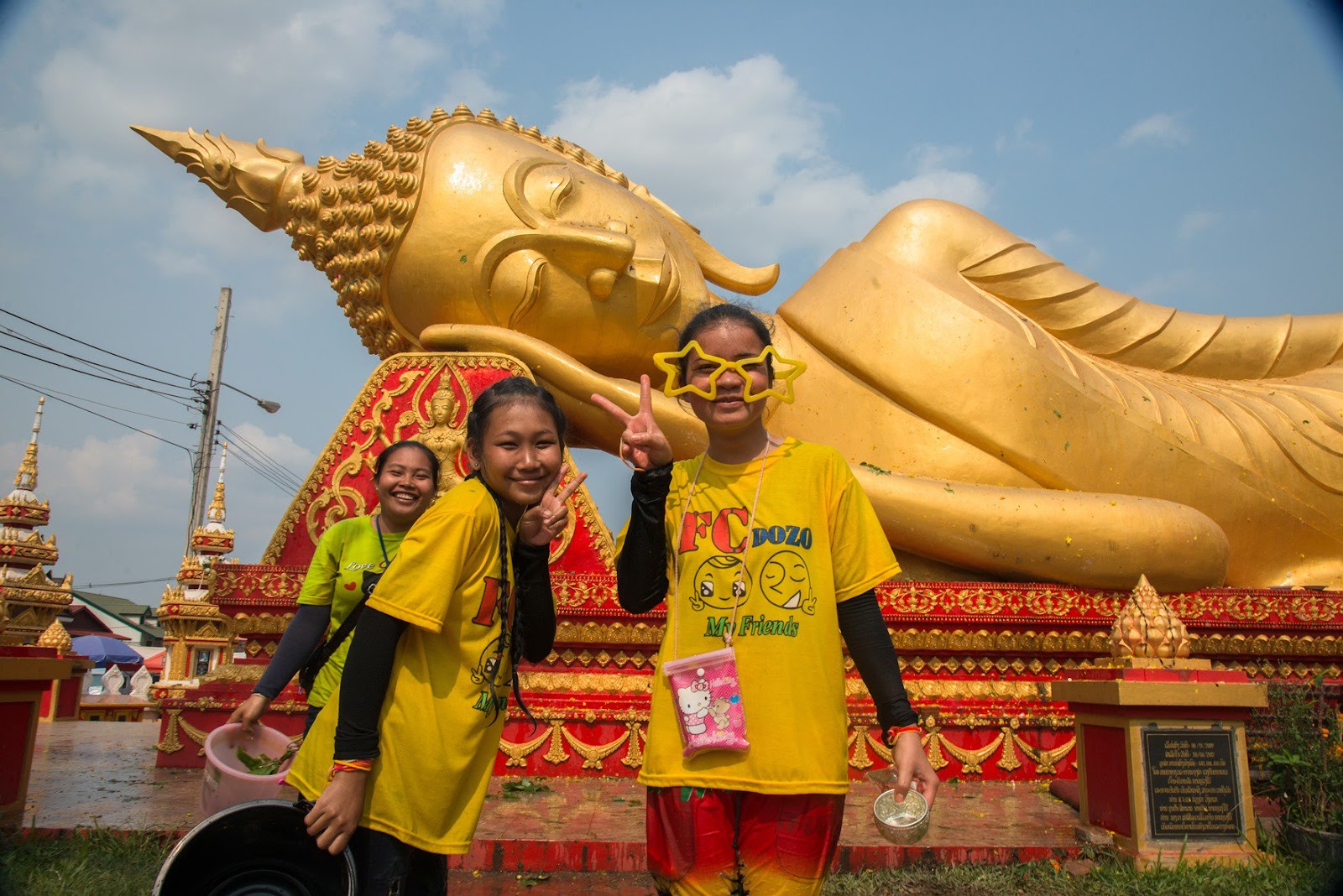 Stupa temple Wat That is a central point for Laotian religious culture, and there’s a good reason why. A beautifully ornate and distinguished temple surrounded by a garden, Wat That is now home to many yearly festivities to honor Buddha. During Pimay, or Laotian New Year, venerable monks descend upon Wat That for religious and cultural ceremonies as well. At the centre of Wat That is the stupa after which it is named, which continues to be one of the most symbolic religious relics in the city. Its at this stupa that religious locals come to memorialize a host of life’s events, including to celebrate fulfilled wishes or mourn the death of loved ones. Although an incredibly iconic religious relic in Laos, Wat That is well worth the visit for its peaceful atmosphere and stunning design, as well. Wat Tchoum Khong Among the temples in historical Luang Prabang, Wat Tchoum Khong is known less for its architectural beauty than its natural aesthetics. Although ornately decorated like its counterparts, Wat Tchoum Khong is also known as home to Luang Prabang’s most beautiful bougainvilleas flower beds and the most blooms in a temple. < Located in the middle of the Luang Prabang peninsula, Wat Tchoum Khong is close to the cultural center of the city, and around its exterior is most commercial and tourism activities in town. But despite its urban surroundings, Wat Tchoum Khong is remarkably peaceful, and is a popular stop for weary travelers and those looking for natural calm. Beyond its myriad colorful blooms, the temple is also home to the ancient gong from which it derives its literal name, The Monastery of the Core of the Gong, or choum khong. 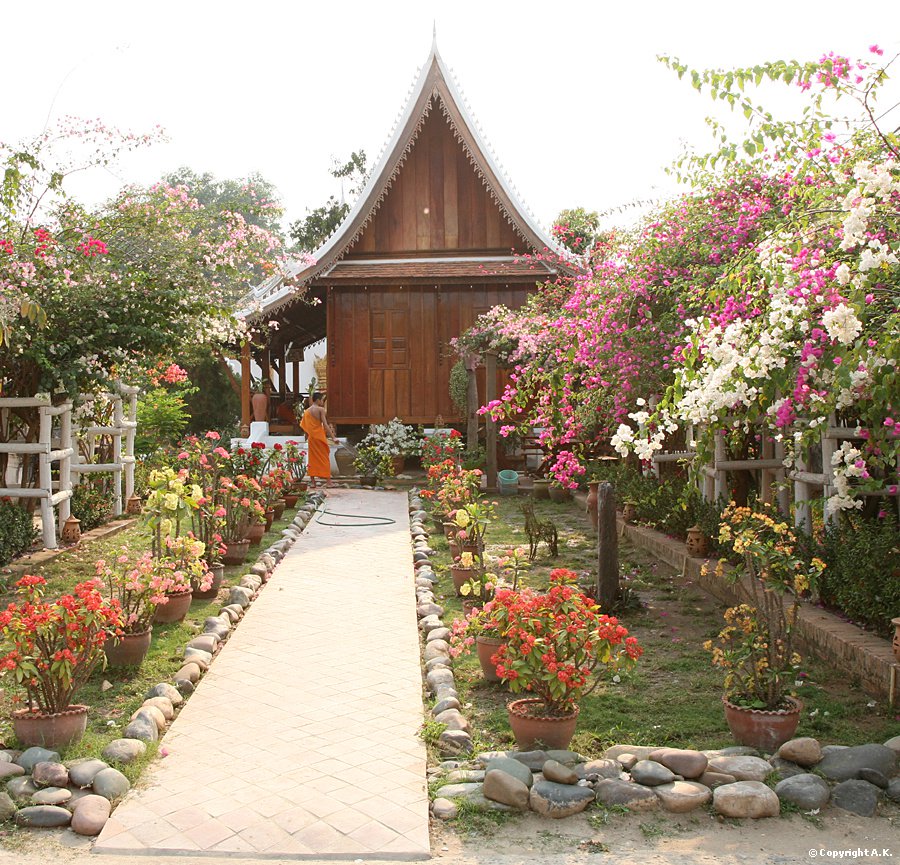 Wat Tchoum Khong (Source: worldvisitguide.com) Wat Pak Kham Those in search of particularly rustic and authentic Laotian beauty in Luang Prabang find one of the city’s lesser known temples the most fascinating. Up to now, Wat Pak Kham is the only temple in Luang Prabang that has not undergone renovation, and its white exterior and iconic swooping roof remains intact but relatively untouched over decades. Although without the gleam and shine of many of Luang Prabang’s temples, wats and pagodas, Wat Pak Kham harks back to Laos’ religious and cultural history and remains, at least up to now, a charmingly crumbling icon in the city. Its not certain that Pak Kham won’t soon undergo renovation like the others in the city, so travelers should put this one at the top of their travel list. — Visit Laos’ most iconic religious destinations while uncovering all that Laos has to offer, with Buffalo Tours’ multi-day adventures to the country’s classic must - see spots. Looking for something lighter?